On Tuesday, we covered a report from Sport on Barcelona youngster Ilaix Moriba.

It was claimed the youngster has received a ‘very strong proposal’ from the La Liga winners to sign his first professional contract with the Blaugrana.

He turned 16 last Saturday and has drawn attention from Manchester City for several months, while Chelsea also joined the race for the teenager who has been compared to Manchester United star Paul Pogba.

In today’s edition of Sport, it’s explained that Ilaix will commit his future to the Spanish champions by signing a contract that will see him continue with the club for the next three years.

With Ilaix set to commit his future to the Catalan club, the report mentions that the Premier League winners are the ‘greatest victim’ of him signing a deal with Barcelona.

The Etihad outfit have been on his trail since last October and were hoping to conclude Ilaix’s transfer once he turned 16. However, that looks highly unlikely if the report from Sport is to be believed. 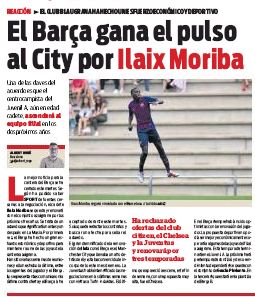 Sport mentions he rejected offers from City, Chelsea and Juventus to sign his first professional contract at Barcelona.