It seems not everyone at Porto is happy with Vítor Ferreira’s move to Wolverhampton Wanderers.

According to Portuguese newspaper A Bola today, the Dragons’ manager Sérgio Conceição was against the youngster’s departure.

The coach gave Ferreira his debut back in January, and following his 12 appearances this season, the midfielder was a ‘firm bet’ for the upcoming season.

But Porto couldn’t say no to the money, and left Conceição ‘displeased’ with the decision, ‘frustrating’ his plans for the youngster. 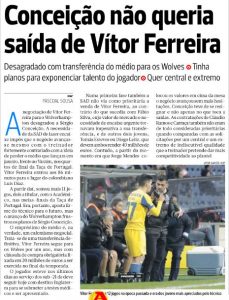 A Bola claims that Porto weren’t planning to let Vítor Ferreira go at first. The priority was to sell Fábio Silva, whose market value would give them some immediate profit.

As soon as Jorge Mendes ‘put the amount on the table’, things advanced ‘with no hesitations’.

Vítor Ferreira is initially moving to Wolves on a loan deal, yet the newspaper says this is only a ‘business euphemism’, since there’s an obligatory buying clause for the Premier League side to pay €20m at the end of the spell.