Arkadiusz Milik finds himself in a transfer tangle, and Tottenham Hotspur could solve it, report Corriere dello Sport.

The Napoli striker was being lined up for a move to AS Roma, with Cengiz Under going the other way as part of the deal. Nicolo Zaniolo’s cruciate injury hasn’t prevented that idea from still being possible, but Edin Dzeko’s future is key.

Juventus have been keen on Dzeko, however, things have stalled, and if the Bosnian doesn’t move then Roma won’t sign Milik.

Subsequently, Napoli have begun to look at ‘foreign solutions’ for their player, and that’s where Spurs come in. Tottenham are ‘leading the way’ for Milik, according to Corriere dello Sport, yet no further information is given on their pursuit.

Jose Mourinho clearly needs another striker, with Harry Kane currently tasked with the role on his own, and the club’s fans have been inundating Spurs’ Twitter account demanding that a solution be found. 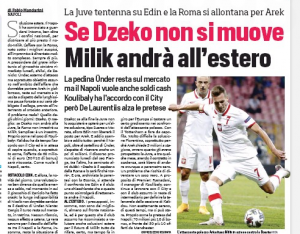 Milik is looking for €5m a season, a figure likely to be after tax, and it’s assumed he’d find that easier to achieve in the Premier League.

Given the 26-year-old has less than a year left on his contract, Napoli aren’t in a position to ask for a huge fee.