Axel Tuanzebe in expected to fly out in the ‘next few hours’ to Italy to push his loan move to Napoli closer to completion, report Il Mattino, via CN24.

The defender spent the first half of this season on loan at Aston Villa, but he wasn’t able to enjoy the progress he wanted with the Birmingham club.

Therefore, they’d like to see him tested at Napoli, and obviously hope to see more than they did whilst he was with Villa. It’s Tuanzebe’s job to prove to Manchester United that they’ve been wrong and that he is ready, and he’ll need to make sure he gets plenty of games in Italy to do that. 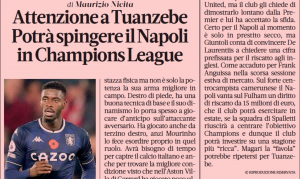 Initial reports had stated that there’d be no purchase opportunity in the loan deal, but Gazzetta now say some at Napoli are tempted to try and get one.

Should Tuanzebe be convinced he still has a future at Old Trafford then it’s likely that won’t be possible.