The Italian newspaper suggest that’s because he wanted to make sure he got another signing in, with Nathan Patterson being that man, however, Vitaliy Mykolenko is the real replacement for the Frenchman, and Everton had his signing secured a while ago.

Gazzetta also say that Benitez showed during his time at Inter that he can be tough when it comes to transfer discussions, and that could be what’s happening with Digne.

Everton will likely want a better deal than the dry loan that the Serie A club are looking for, and the manager likely believes he can push for more. 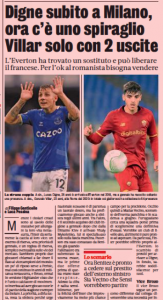 Meanwhile, in Milan the stance is that they’re waiting for the Premier League club to soften their stance, and allow a simple loan without any clauses related to a permanent deal in the summer.

A decent loan fee could help things along, although there’s no mention of that from Gazzetta. Digne will have to wait for it all to get sorted out, or another club to appear on the scene.