Giovani Lo Celso to Tottenham has been one of the long-running sagas of this transfer window, and it’s unlikely to die down before next week’s deadline.

Tottenham remain keen on the midfielder and have been negotiating with Real Betis for weeks. However, they are yet to find an agreement with the Spanish club.

And if today’s update from Diario de Sevilla is anything to go by, it seems the two clubs remain as far apart as they’ve ever been.

Diario explain that Betis want to raise more than €100m this summer and Lo Celso is the player who can bring the most in.

The offers they have so far see them fall short of that, though, and that’s why they’re resisting the current offers for players such as Lo Celso.

Tottenham are the main contenders for the Argentine and are the only club to put in an official bid, but are yet to match Betis’ asking price. 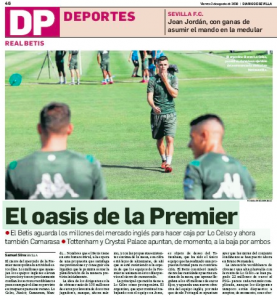 Spurs initial bid was €45m fixed with bonuses, which Betis deemed far too low, especially as the newspaper says they want €70m for their man.

Betis are now waiting ‘for a new offensive’ from Tottenham, but Diario says a deal is looking ‘more and more complicated’ at this point.

Despite their need for money Betis are not willing to accept the offer from Tottenham, and until they raise their bid considerably, they face little chance of getting Lo Celso in before the deadline.

There’s disagreement in Seville whether the offer is €45m or €50m, but either seems too low, and a little effort from Spurs would likely see Betis do likewise.