Three days ago, the Mirror reported Liverpool have registered their interest in signing Pedri with the Barcelona player’s representatives.

Claims made in England have reached the Catalan press and are relayed in today’s edition of Mundo Deportivo.

Within in the report, it’s pointed out Jürgen Klopp is ‘very interested’ in bringing the 18-year-old to Anfield to strengthen the Reds’ midfield.

In his debut season at the Camp Nou, the teenager has played in 44 matches in all competitions and his performances have received appreciation from club president Joan Laporta.

Mundo state Laporta wants to address the Spain international’s renewal once he has his plans in place for his new project. For now, he remains focused on extending the contracts of Lionel Messi and Ousmane Dembélé.

Although Pedri is shielded with a €400m release clause in his contract, Ronald Koeman’s side are clear they will have to offer the young midfielder an improved contract if he continues to shine for the club. 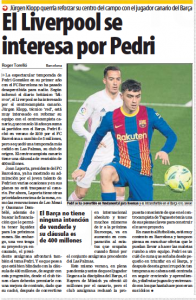 Despite interest from the Merseyside club, Pedri is ‘very happy’ at Barcelona and has no plans to listen to offers from Liverpool or any other suitor.

His dream as a child was to succeed with the Blaugrana and after a good start to his Barca career, Pedri is ‘focused’ to continue his growth and development with the La Liga side.

The stance maintained by both Barca and the player will rule out Liverpool’s chances of signing Pedri.