The Liverpool goalkeeper already owns two coffee bars in Belgium, and, along with his brother Wouter, launched Twenty Two Coffee to the media this week.

The name comes from the shirt number Mignolet started with in Belgium, carried on with at Sunderland and still has at Liverpool.

During the launch, he was inevitably asked about his future at Anfield. Having tried to leave Liverpool when it became apparent he wouldn’t be getting games, the 31 year old has openly spoken about his frustration on more than one occasion.

With Alisson Becker the club’s undisputed number one, an exit will again be looked for in the summer, as long Liverpool allow their player to leave.

Quoted by Het Nieuwsblad, Mignolet explained: “I would like to be playing all the time, but I don’t have my destiny in my own hands because I am still under contract with Liverpool for two years.” 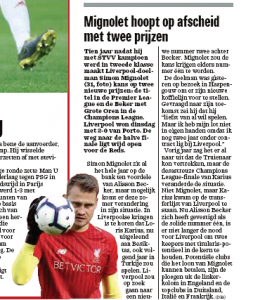 The Belgian newspaper reports there’s interest in a transfer from clubs in England, Italy, Germany and France.

Jurgen Klopp will want to get a replacement in, and with Loris Karius having all kinds of problems in Turkey, the German could return to Anfield in the summer.