Two days ago, SportBild reported Liverpool are one of the clubs interested in Borussia Mönchengladbach’s Denis Zakaria.

The Reds also have Zakaria’s teammate, Florian Neuhaus, on their radar. That’s according to Kicker, who say the Merseyside club have ‘expressed interest’ in signing the 23-year-old.

The magazine focuses on Borussia Dortmund’s interest in Mönchengladbach boss Marco Rose to be their next manager. BVB ‘not only reaches for Rose, but also for Neuhaus’.

It’s claimed the midfielder is happy with the Bundesliga side and also with Rose and sporting director Max Eberl. The Germany international feels ‘valued’ at the club.

Neuhaus has a contract until 2024 and it includes a €40m release clause, which could make him an attractive target in the summer.

Kicker states that apart from Dortmund, the Premier League winners have joined the list of suitors for the player.

If Jürgen Klopp’s side are keen on signing Neuhaus, they can do it by paying his €40m release clause. 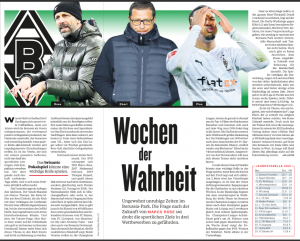 Neuhaus, like Georginio Wijnaldum, operates in the centre of the pitch.

The Dutchman’s current deal runs down at the end of the season and if he decides to leave Anfield, the Mönchengladbach midfielder can replace him in the summer.

The German has four goals and four assists in 19 league matches this season for Mönchengladbach.