Barcelona have informed Deco they will now try to sign Raphinha, after their president, Joan Laporta, met with the Leeds United star’s agent earlier this week.

That’s according to Mundo Deportivo, who reiterate the Spanish giants have reached an agreement with the winger.

Xavi Hernández’s side convincing the Whites won’t be easy as they are demanding €55-65m, and Barca must also make sure the financial resources are available to carry out the operation.

Jesse Marsch’s side want to make a lot of money through the Brazil international’s sale and aren’t willing to accept any players as part of the deal. It is down to Barca to find the right formula with the Premier League side to conclude the transfer.

The 25-year-old has put other clubs’ interest aside as he is waiting for the Catalan club to make an offer to the Whites. 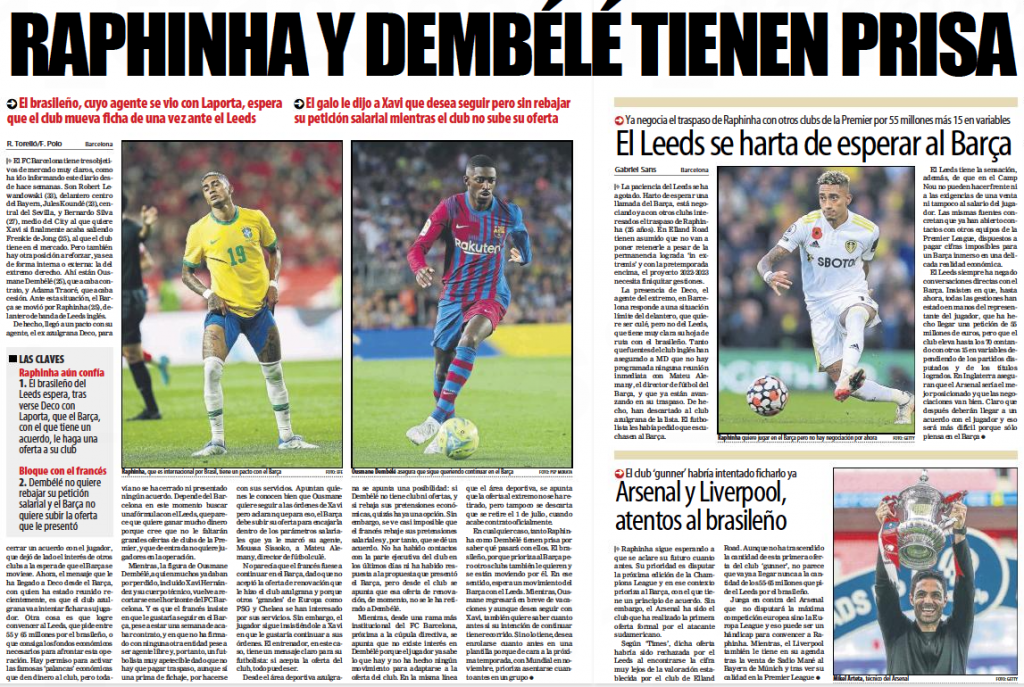 Another report from Mundo explains the English club’s ‘patience has run out’. Leeds are tired of waiting for the Blaugrana to make an approach for the ex-Rennes man, who they assume will leave Elland Road this summer.

There have been no direct talks between the two clubs and communications so far have been through Raphinha’s agent. Deco’s presence in Spain saw suggestions his client could end up at the Camp Nou.

However, Leeds sources have informed Mundo there is no immediate meeting scheduled with Barca director Mateu Alemany.

The same sources stated the Premier League side are making progress with other sides, who are interested in Raphinha. Leeds have a ‘clear roadmap’ for the Brazilian.

With regards to Barca, Leeds have a feeling they cannot meet their demands. Therefore, the Whites have opened talks with Premier League sides, who have come forward to sign the attacker.

Mundo explain Raphinha’s suitors in England will have difficulty finding an agreement with him since he ‘only thinks about Barca’. That may change if Xavi’s side fail to make an offer to Leeds.