Home Uncategorised Leeds made late ‘audacious offer’ to buy player and then loan him...
SHARE

We don’t want to rub salt in the wounds by doing too many articles on the subject, but Jonathan David’s decision to turn down Leeds United for a move to Lille is still a topic of discussion across the Channel.

L’Equipe recently had an article on the subject, explaining that Andrea Radrizzani, Victor Orta and Marcelo Bielsa all called the Canada international to convince him to move to Elland Road, to no avail.

The player himself has made it clear he chose a move to the north of France because of the project placed in front of him by Luis Campos, prioritising game time above all.

Now we have Sport/Foot in Belgium giving us the information their sources have brought up, revealing a very desperate and last ditch attempt from Leeds to get the player.

It’s explained that earlier this year, a move to Lille was anything but a priority for David, who had spoken to Manchester United and Napoli.

Then, during his holidays near Ottawa, he was ‘convinced’ that Bundesliga would be his next step, practicing his dribbling and long shots with his coach and mentor Hanny El-Magraby.

However, everything changed following a meeting between Gérard Lopez, Lille’s owner, and David’s agent, ‘who learned to appreciate each other’.

This was followed by that famous meeting between the player and Luis Campos, which convinced him a move to Ligue 1 was the right one for him. 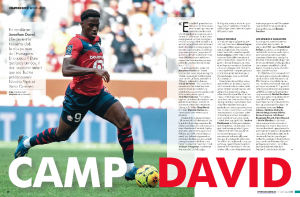 The aforementioned El-Magraby told Sport/Foot: “Lille really changed everything during that conversation. The French club got the chance to show their vision and Jonathan reviewed his preconceptions about the club. He also understood he needed a stable project and that the Premier League was a future objective”.

The location helped too, since the northern town isn’t far from Gent and Brussels, where his ‘social bubble is’.

That’s when Sport/Foot reveal that Leeds United tried an ‘audacious offer’: to buy David to then loan him out immediately to the club of his choice.

Radrizzani wanted to avoid the forward joining Lille, but was unable to do so.

In the end, €27m were enough to convince Gent to sell their star player to the French side, with a potential €3m in bonuses on top of that.