Barcelona allowed Marlon to join Nice on a two-year loan deal last summer. His displays for the French club attracted interest from West Ham United and they want to sign him on a permanent transfer this summer.

The June 11th edition of Catalan newspaper Mundo Deportivo reported the Hammers are “very close” to completing a deal for the Brazilian defender. However, Marlon’s move to the Premier League sounds like it’s taken a step backwards, according to today’s report from the same publication.

Mundo Deportivo now claim that Barcelona are demanding €25m to part ways with their player in the summer transfer window.

Barcelona have already informed Nice about their decision to sell Marlon and the Ligue 1 outfit are already in the market for a new defender. This would obviously impact on the West Ham target if a deal isn’t reached for his transfer. 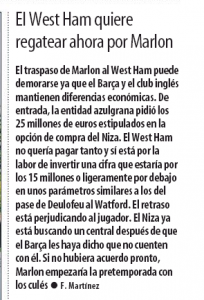 Should all these claims be true, it really doesn’t feel like West Ham’s fault here. A fee of €25m would be way over the top, and today’s version of Sport, another Catalan newspaper, values the player at €15m.

On May 30th, Sport reported Barcelona would accept a €15m offer from West Ham.