On Tuesday evening, we covered claims from Spain that Marlon to West Ham United is increasingly looking like a sure thing.

The central defender signed for Barcelona in 2016, initially on loan from Fluminense, and made the move permanent before going out on loan to Nice for a two year period.

Whilst the French club are thought to have a buying option, it would seem that doesn’t exclude Barcelona selling him to someone else, given there are now several claims he’s off to West Ham.

Wednesday’s edition of Sport has Marlon on the front page and talks of a €15m transfer. Inside it’s stated ‘Manuel Pellegrini’s West Ham bets on the Brazilian central defender’.

Barcelona will accept West Ham’s €15m offer, say Sport, and it’s stated Marlon will play in the Premier League next season. The Catalan newspaper couldn’t sound any more sure, saying things like: ‘Marlon will have Manuel Pellegrini as coach’. 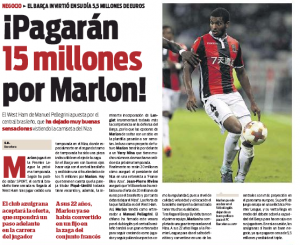 Sport clearly rate the 22 year and say he’ll arrive in the Premier League to ‘make the definitive leap and become one of the central defenders with the most potential in Europe’.

Mundo Deportivo, another Catalan newspaper, also cover the claims and suggest there may be a repurchase option for Barcelona.