Kai Havertz is plastered on the front cover of this week’s edition of SportBild, and inside it’s claimed seven clubs are in negotiations with the player’s camp for a summer transfer.

Those clubs are named as Chelsea, Liverpool, both Manchester sides, Bayern Munich, Barcelona and Real Madrid.

Concentrating on the Chelsea angle, the outlook is pretty positive compared to the claims for some of the other clubs. Frank Lampard’s reliance on youth is explained, and whilst that’s been partially down to the Blues’ transfer ban, it’s claimed the manager will continue that outlook when he’s able to sign players next summer.

Lampard is ‘looking for more young stars’, and the manager’s plan is said to be to develop the next great team in English football. That Chelsea are only two points behind Manchester City is presented as a sign things are on the right track. 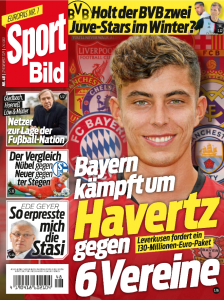 In his search for talent, the Bayer Leverkusen player stands out for the Stamford Bridge boss, but there’s serious competition and an asking price which is put at €130m.

As often happens with these claims, it feels like the big story is about Bayern Munich, and everything else may be a sideshow.