It was first The Telegraph who reported on Tuesday that Jorge Jesus has emerged as one of Everton’s options to replace Marco Silva at the club.

Now it’s time for the Portuguese press to come up with a story, not only confirming the information, but also bringing a few more details about it.

Newspaper Record first brings a big story saying the Brazilian FA are looking to meet Jesus before the start of next year. But they don’t take this possibility very seriously, because although the manager will listen to their offer, he’s not very keen on taking charge of a national team at this stage of his career.

Then Record adds that Everton ‘are also in the race’, since Marco Silva’s stay at the club is at risk and they’re considering Jesus for the job. 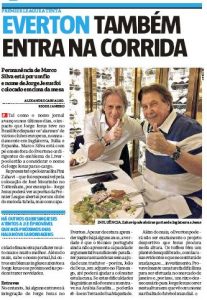 They say that although Jesus would have the Premier League doors open to a mid-table club, Everton actually have a financial reality which would allow him to do ‘a lot more’.

The outlet also claims that there are other English sides interested in the manager, and he could receive approaches in the coming days.

But there’s a few difficulties for Jesus’ move to Everton, and the first one is language. Although he has learned English, his abilities aren’t good enough to explain ideas to players without the use of a translator.

However, he could get help from his current assistant João de Deus (John of God, believe it or not), since he was the one who did this job during their time in Saudi Arabia.

To finish the story, Record has a whole paragraph explaining why Everton wouldn’t be a very good choice for him now. They say: “The Toffees have an unbalanced squad with obvious gaps that will need change and… investment. Probably a daunting task to be done in the January market and therefore an unnecessary risk for Jorge Jesus to run as he sees his name in the limelight of world football.”

In fact, Jorge Jesus’ work at Flamengo has been pretty impressive. When he took charge of the club in July, they were third in the league table and had the risk of being eliminated from the Copa Libertadores. He ended up winning both titles last weekend.

Flamengo are playing in the Club World Cup next month and we find it very unlikely that Jesus will lose focus before that. However, he’s not giving the Brazilian side the guarantee of his renewal, so Everton might have a chance.