Another day, another story on Antoine Griezmann joining Barcelona this summer. The France international scored twice and assisted one for Gabi as Atletico Madrid defeated Marseille 3-0 in the Europa League final.

Just hours after Diego Simeone’s side won the Europe’s second tier club competition, there were several reports on when the forward will officially join the La Liga winners. One of them came from Thursday edition of Catalan newspaper Sport. They claimed Barcelona are in “final stretch” of signing Griezmann and the transfer will be announced in July.

This is mainly because Griezmann has a release clause of €200. until June 30th and the price tag will drop down to €100m from July 1st. Today’s report from Spanish newspaper AS contradicts what Sport reported on Thursday.

AS claim Barcelona president Josep María Bartomeu “intends to announce” Griezmann’s signing in the next two weeks. The Spanish champions have a total agreement with the player and now have to convince Atletico to sanction their star player’s sale. 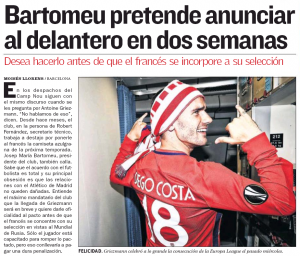 Bartomeu’s “main obsession” is that he does not want to damage his relation with Atletico in Barcelona’s pursuit of the former Real Sociedad star. Griezmann is part of France squad for the 2018 World Cup and the Camp Nou outfit’s chief wants to formalize the transfer before the attacker flies to Russia.