This morning, Portuguese newspaper Record came up with a surprising front page story saying João Palhinha could leave Sporting in the last days of the January transfer window.

Mentioning the interest from Premier League clubs such as Manchester United, Tottenham Hotspur and Wolverhampton Wanderers, it was claimed that the Lions decreased their demands for the midfielder and will listen to offers of over €30m.

Now as Sporting play Santa Clara for the League Cup tonight, manager Ruben Amorim has spoken to the local media and was asked about that story. He made it clear that he’d like to keep Palhinha in the squad, but also claimed he may not be the one controlling the situation.

“Palhinha goes to the game. Regarding the market, we don’t know. Seven days to go. It’s a short space, everyone will know what’s going to happen, it’s not worth thinking about,” said Ruben Amorim (via O Jogo).

“Palhinha is [ready] to play and is doing very well. I trust that I can stay with Palhinha, but football has things that we do not control, we know that the situation of the club and the country has not changed that much. I’m counting on Palhinha and I hope he continues.”

Asked if €30m would be a ‘good amount’ for Palhinha, Amorim said: “That isn’t with me, I look more at the technical-tactical part. Palhinha is sorely missed, but whatever happens we’ll resolve the sporting part.”

Tottenham and Wolves had already been linked to Palhinha back in the summer, while Manchester United’s interest in the midfielder looks like something new. Besides the chase from English clubs, Record also claimed there’s competition from Atletico Madrid and Sevilla.

‘Still no movement’ – Man United man’s future up in the air, agent has received ‘no signal’ from club 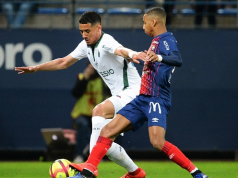 “He needs to come back” – Arteta says he wants player at Arsenal next season, now has ‘experience’ required

‘Still no movement’ – Man United man’s future up in the...

“He needs to come back” – Arteta says he wants player...