Even though Sporting are a club always surrounded by rumours about outgoing transfers, there hadn’t been many stories about them selling any players in January, at least not with their stars involved.

Now it turns out that with less than a week until the end of the transfer window, newspaper Record comes up with a front page saying midfielder João Palhinha has ‘one foot out’ of the Lisbon side.

The likes of Manchester United, Tottenham Hotspur and Wolverhampton Wanderers are all back being linked to the 26-year-old, as there have been ‘many approaches’ from agents in the past few days.

Good news for the interested clubs is that Palhinha’s price has gone down since the summer. Sporting were demanding at least €40m for his sale, and the minimum price is now €30m. 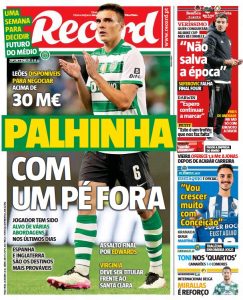 Manchester United, Tottenham and Wolves face competition from La Liga, where Atletico Madrid and Sevilla are both interested in Palhinha as well. Record doesn’t seem to have a clear idea of who has an advantage in the race, saying that ‘Spain and England are the most likely destinations’.

However, it’s said Palhinha sees some of those options ‘with good eyes’, as he has the Premier League as a ‘dream’, so perhaps that’s an extra argument for Red Devils, Spurs and Wolves in this competition for his signing.