Liverpool sealed a berth in the Champions League final for second year in a row after overcoming a 3-0 first leg deficit to seal a 4-0 win over Barcelona in the second leg at Anfield on Tuesday.

Jurgen Klopp started Divock Origi and Xherdan Shaqiri along with Sadio Mane to lead his side’s attack due to the absence of Mohamed Salah and Roberto Firmino.

Jordan Henderson’s shot from inside the box was parried out by goalkeeper Marc-Andre ter Stegen and it fell right in front of the Belgian, who made no mistake to open the scoring for his side in the seventh minute.

An injury to Andrew Robertson forced the manager to introduce Georginio Wijnaldum in the second half and the Dutchman made the difference as he scored two goals in space of three minutes before the hour’s mark.

Trent Alexander-Arnold’s trick corner kick took Barcelona players by surprise and allowed Origi to score his second goal of the match in the 79th minute, which proved to be the difference.

The La Liga winners had several opportunities to score the crucial away goal, but Alisson Becker made sure his side were still in the tie.

We take a look at how Sport and Mundo Deportivo have reacted to Tuesday’s performance at Anfield. 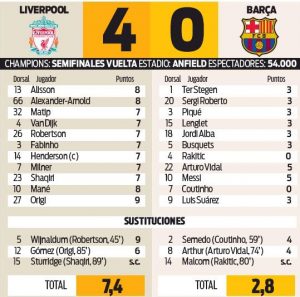 We start with Sport, whose highest rating for Ernesto Valverde’s men is 5/10 and is handed out to Lionel Messi and Arturo Vidal.

Philippe Coutinho and Ivan Rakitic are given a rating of 0/10.

For Liverpool players, it’s no surprise that Origi and Wijnaldum are the highest rated players. They’ve been rated 9/10.

Moving on to Mundo’s ratings, only Vidal got two stars while the rest of them were given one star.

For Liverpool, four stars are handed to Origi, Wijnaldum and Alexander-Arnold, while two stars are given to Milner, Shaqiri and Fabinho. Henderson, Alisson, Van Dijk, Matip and Mane are handed three stars for their display. 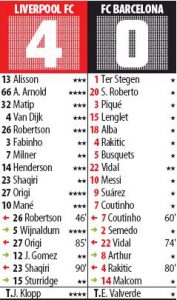 Mundo have hailed the former Newcastle man as a ‘Hero’: ‘He entered the second half and his performance will be recorded on one of the club’s golden pages. He made it 2-0 and 3-0 in just three minutes.’

Van Dijk is described as a ‘director’ and Liverpool’s ‘natural leader’. Robertson was ‘omnipresent’ because he ‘was in attack, finished and was attentive to protect the defence…’

Mundo had kind words for Henderson: ‘The captain of Liverpool embodies that character that defines Anfield. He does not give up.’

There was no stopping the Catalan newspaper from praising Milner, not just for his performance against the Blaugrana in the European competition, but for his entire career.

Mundo claim Milner was ‘Incombustible’ because ‘age is not an impediment for the Englishman to always perform at a remarkable level. He wears out in every clash, faithful to the commitment he had throughout his career.’ 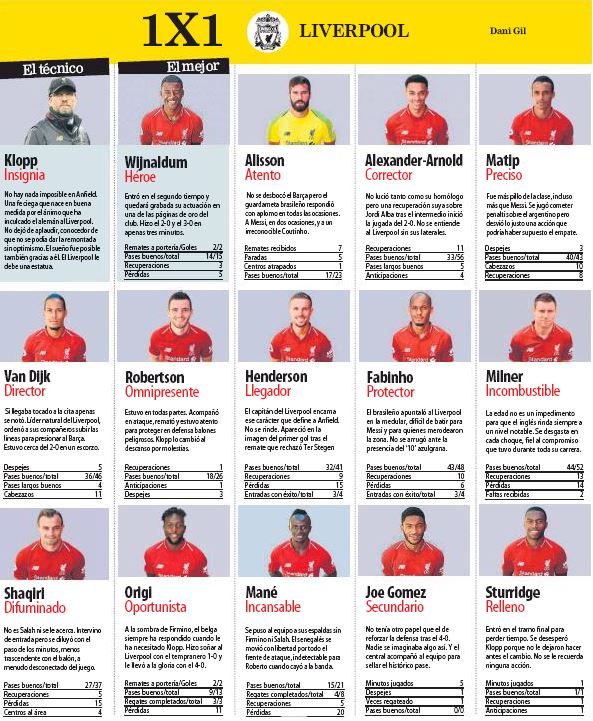 The newspaper hailed Origi and labelled him as an ‘opportunist’ for delivering every time Klopp has called on him this season.

Liverpool will face either Tottenham or Ajax in the final. The first leg in London ended in a 1-0 defeat for Spurs.