Home Europe Fulham offer knocked back for player, told to pay €40m or no...
SHARE

Fulham are the latest club to be linked with a move for Espanyol’s David Lopez.

The central defender, who can also play in midfield, is one of the Barcelona club’s most important players and there’s been repeat talk of trying to tie him down to a new deal.

Throughout this there’s been claims of interest from elsewhere, with several clubs being dragged into the situation. Everton have been linked to the player sporadically, including this week, but now it passes over to Fulham.

Thursday’s edition of Mundo Deportivo reports Fulham have made an offer for the player, but doesn’t reveal how much that offer was. Regardless, it’s stated the proposal has been rejected and the Premier League club have been referred to the player’s buyout clause. 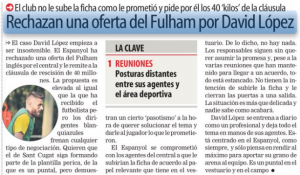 That means if Fulham should still want to pursue a deal then it’ll cost them €40m, at least according to Mundo Deportivo’s claims.

It’s hard to decipher whether Fulham have been dragged in as window dressing in the renewal saga or whether the approach is real. Should it be the latter then an offer over €30m would certainly test Espanyol’s resolve, but may seem high for a player who turns 29 years of age in October.