L’Equipe reported on Wednesday that it appears Bordeaux’s Malcom could be on his way to Everton.

Later that day, Foot Mercato reported the Merseyside club are looking at the wide-man as a solution should Ademola Lookman leave Goodison Park. L’Equipe don’t go with that line.

Gus Poyet is in charge at Bordeaux and the Uruguayan coach did not include Malcom in the squad during their friendly victory over Saint-Etienne.

The former Sunderland manager admitted that “something is going on” with Malcom and confirmed several clubs are interested in signing him. Bordeaux face Union Berlin in the next friendly on Saturday. Poyet has warned that Malcom will feature this weekend, if his transfer is not agreed with another club.

“Something is going on [with Malcolm]. [It] is not 100% done, but it starts to move, not bad, so he has not played [against Saint-Etienne],” Poyet was quoted as saying in today’s edition of L’Equipe.

“We came to an agreement on the fact that if it’s not before Saturday, he will take part in the friendly match against Union Berlin.”

The report also mentions Tottenham Hotspur had opened talks with the player’s entourage. However, it is Everton who are leading the race. The discussions between the two clubs have advanced enough in recent hours that it’s sufficient enough to have a ‘quick resolution’. 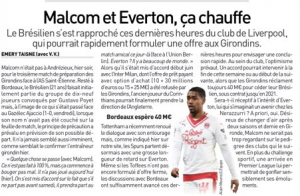 L’Equipe claims Bordeaux are ‘optimistic’ that a deal can be agreed with Everton this weekend or at the start of the next week. The Ligue 1 outfit are demanding €40m to part ways with Malcom this summer, but it’ll be no surprise if he moves for less.

The Brazilian’s transfer is ‘heating up’ and a move has ‘never seemed so imminent’, according to L’Equipe.