Home Championship Fulham Fulham have ‘dropped out’ of signing player, despite him skipping training over...
SHARE

Kara Mbodj has been repeatedly linked with a move to the Premier League in recent years and several times a transfer has seemed close.

The defender has wanted the move, and when things have broken down in the past he’s made no secret of his frustration and has agitated at Anderlecht before being brought back into the fold.

Fulham have been the latest club linked with the player and a few days ago it was reported in Belgium that the Premier League club had the ‘most concrete’ interest and a move to the Cottagers would be the ‘ideal scenario’.

Then it was reported that despite Kara attracting interest from France, a transfer to England seemed to be the preference. 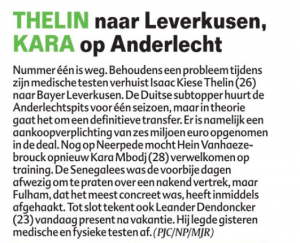 HLN’s Tuesday edition explains that Fulham have now ‘dropped out’ of the running. It’s stated Kara has missed training for the past few days because of transfer talks over an ‘imminent departure’ but things haven’t come to fruition.