Yannis Salibur has had a very stressful week. The subject of deadline day negotiations between Hull City and Guingamp, Salibur will have believed he was a Premier League player last week, before FIFA questioned the paperwork.

Hull City and and Guingamp have now given up on the transfer, and some insight about the situation has been reported in France on Wednesday.

French newspaper L’Equipe report that Guingamp would have received around €10m for the forward, but Hull City, according to the claims, sent the paperwork off too incomplete.

Guingamp’s president Bertrand Desplat is quoted as explaining: “We forwarded all the documents at 11:57pm. and Hull at 11:59pm, but incomplete. Perhaps there there was a lack of coolness on their side. After that, schedules are schedules. If you have minor differences between what is required and what is sent, it can be corrected the next day with FIFA. It depends on how incomplete it is.“ 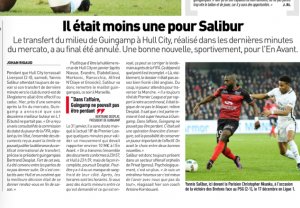 L’Equipe suggest the paperwork wasn’t ‘well crafted’ enough by Hull, and it seems in the panic to get the paperwork through before the cut-off, too much was left out and FIFA just simply believed the details to be too incomplete.

Desplat added that Gungamp and Hull will speak again towards the end of the season to try and resurrect the transfer.