Home Europe “There are the foundations for an interesting project” – Fabio Capello backing...
SHARE

It’s fair to say that Carlo Ancelotti’s arrival at Everton last month has created something of a stir in the wider football community.

Few would have seen the Italian, who has won titles in all top five European leagues and enjoyed three Champions League successes, rocking up at Goodison Park, particularly given their struggles this season.

Instead, the Blues have pulled off something of a coup in securing his signature, with pretty much every Everton fan delighted by the move.

His return to the Premier League has garnered plenty of interest in Italy, with every man and his dog giving their opinion on the move.

The consensus on the move has been surprise, with many surprised that Ancelotti would make a move to Everton in the first place.

Former England manager Fabio Capello is not taking that stance, though, instead suggesting the ‘interesting project’ will have lured Ancelotti to Merseyside. 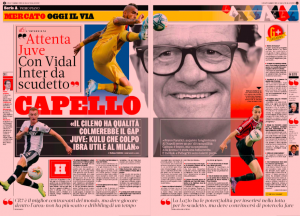 “I am very happy,” he told Gazzetta Dello Sport.

“Carlo will have understood that in that club you can work in a certain way and that there are the foundations for an interesting project.

“Wherever he has gone, he has won. Ancelotti has a fundamental talent: he knows how to manage the pressure.”