The Italian manager didn’t exactly leave Stamford Bridge on the best of terms, and a legal battle followed his exit. According to the Italian newspaper, that’s now making the Blues act tough in transfer negotiations with Inter Milan.

Conte is said to be keen on both Marcos Alonso and Olivier Giroud, yet the Premier League club are putting up barriers, specifically for Inter. Despite the two being hardly used, it’s claimed Chelsea are insisting on €40m for the Spaniard and €10m for the Frenchman.

Specifically with Alonso it’s heavily suggested Chelsea are well aware €40m is unreasonable, but are refusing to drop down from that amount because they’re not keen on helping Inter and Conte out in the transfer market. 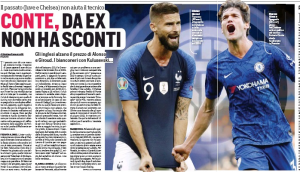 Inter had wanted a loan for Alonso, with a buying option of around €25m and were willing to negotiate, potentially upwards, on that basis. Chelsea slammed the door shut.