Following Monday’s claims that Lucas Torreira has let Arsenal know he wants out of the Emirates, Gazzetta dello Sport go one step further on Tuesday by claiming an official ‘direct’ contact is on its way.

So far chatting with the Uruguay international’s agent, Milan clearly feel they’ve been told enough positives to believe they can get a deal over the line, with a club to club chat and an ‘offer’ being planned for some time between today (Tuesday) and the end of the week.

The Serie A side have ‘two allies’ on their side ahead of the talks, the first of which is Ivan Gazidis, who left Arsenal to go to San Siro, and his contacts at the club are believed to be able to ‘ease’ discussions between the two clubs.

The second happens to be the player himself, as it was made clear on Monday the defensive midfielder had started pushing for an exit. 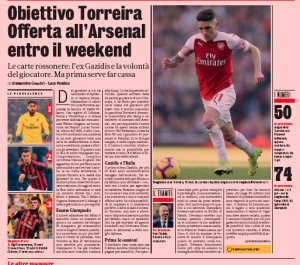 While an ‘offer’ might be on its way, as Gazzetta point out, the money cannot be paid just yet, as Milan need to sell first.

Franck Kessie and Suso are the prime candidates to provide necessary funds for Torreira, yet nothing has arrived on the Italians’ desk just yet.

Considering how long negotiations normally take and Arsenal’s likely reluctance to sell cheap (or at all), there should be plenty of time to gather the required money.

If not, then Torreira stays with Unai Emery, and all is well.