Filip Krovinovic is on the verge of signing for Norwich City.

Record reports in their Friday newspaper that ‘everything indicates’ the 23 year old will be moving to the newly promoted Premier League club.

The transfer will be a one season loan from Benfica, and the Portuguese newspaper explains Norwich have appeared after other interested clubs, but have immediately jumped to the front of the queue.

Vitoria Guimarães and AEK had been interested, and there was even an agreement in principle between the former and Benfica, however it would appear the Canaries have ruined that. 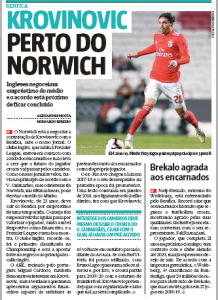 Benfica prefer the Norwich City option because it sees their player move to the Premier League. It’s thought playing in England’s top flight can be a big boost to Krovinovic’s value, especially if he does well.

The plan of the Lisbon club has been to raise the Croatian’s value, in both a sporting and economic way, and that’s why they seem thrilled Norwich have come forward.