Home Europe Everton offer as player pushed, could move in ‘week of madness’ for...
SHARE

Throughout this summer it has been apparent Malcom is a player Barcelona would have no problem selling.

The midfielder is on the list of players that the La Liga champions would be happy to move on, partly just to raise some cash but also make space for Neymar.

Earlier today we covered a report that said Everton had offered close to Barcelona’s asking price for the Brazilian and their interest is backed up by Sport.

The newspaper confirms that Barcelona are looking to sell Malcom this summer and that they want €45m. That fee is €5m lower than the €50m Mundo Deportivo stated earlier, but also €5m above the €40m Everton were said to have offered earlier in the window.

Everton are again named as an interested party, alongside Tottenham and Arsenal, and it’s explained that the Premier League sides would have to sign Malcom permanently if they are genuinely interested.

That’s because the Brazilian wouldn’t get a work permit for a loan move because he doesn’t meet the requirements.

All three clubs are aware of Barca’s asking price, but Everton are the only side to have made an official bid, which is lower than the €45m Barcelona are asking for.

For his part, Malcom is more interested in a move to Italy and Napoli and Inter Milan have shown interest, albeit only for a loan with a purchase option. 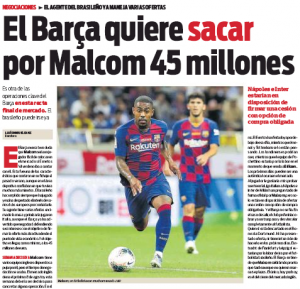 Barcelona prefer a permanent sale, and that could see them push Malcom towards the Premier League sides and notably Everton.

The two clubs have a positive relationship given the business they’ve done together in the last 18 months so if Everton’s interest is genuine, there’s no reason they can’t iron out a deal before the Premier League deadline.

Sport predict a ‘week of madness’ for transfers.