On Wednesday, reports indicated Everton are looking at Barcelona’s Ronald Araújo to strengthen their defence next season.

Mundo Deportivo journalist Xavier Bosch also explains the Toffees are searching for a new centre-back and have ‘noticed’ the 22-year-old.

With the Merseyside club having their eyes set on the defender, Bosch claims they ‘don’t have a bad taste’.

The centre-back has made 20 league appearances this season and the journalist states he is ahead of Óscar Mingueza and Samuel Umtiti in the pecking order.

Therefore, his continuity at the Camp Nou is ‘assured’, even though Carlo Ancelotti’s side will be ‘left with a desire’ to acquire the Uruguayan’s services.

Bosch states Everton ‘continues’ to be the Catalan club’s ‘best client’. That’s because in the last few years, the Premier League side have taken multiple players from Barcelona.

All parties were left satisfied with the deals done so far, but the journalist warns Araújo 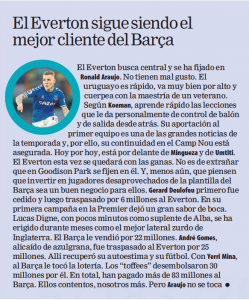 Online, Mundo Deportivo also states the South American is in Everton’s orbit and then provides their own information.

Despite rumours of the Toffees’ interest, Ronald Koeman’s side have ‘no intention’ of selling Araújo after his ‘good progression’ this season.

However, the report adds Barca would consider the player’s sale if there’s an ‘exorbitant offer’.