With Kalidou Koulibaly reported as staying at Napoli for an extra year after Chelsea’s offer was rejected once again, attention has turned to Torino’s Nikola Maksimovic.

The Serbian defender was Napoli’s targeted replacement were their Senegalese star to leave this summer, but Torino’s refusal to accept offers below €30m for their defender has put a stop to everything.

According to Gazzetta dello Sport, West Ham are said to now be interested in Maksimovic, with Chelsea also keen (Antonio Conte’s interest in him dates back to his Juventus days), but the message remains the same: ‘€30m and not one Euro less’. 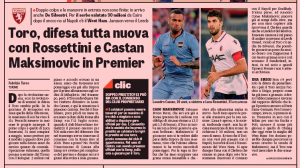 What could help West Ham in this, however, is Torino looking at one of the London club’s player in Pedro Obiang.

We covered claims from Tuttosport a few of days ago on this, and now Gazzetta are adding fuel to the fire with a report of their own.

The Spain U21 international is one of the potential targets for Sinisa Mihajlovic as the Serbian manager looks to bolster his midfield, and Gazzetta suggest this transfer could help the other.

While this mutual interest in each other’s players could be a benefit in the long run, Torino are keen to keep both deals separate, meaning they don’t want West Ham to offer money + Obiang for Maksimovic.

The 24-year-old defender was recently AWOL as he tried to force a move away from the Serie A side.