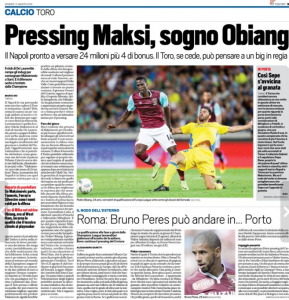 West Ham midfielder Pedro Obiang is reportedly having his situation monitored by Torino.

According to Tuttosport, the Italian side are interested in the signing and have already made contact to learn the conditions of a transfer. That sounds to us like they’re tentatively trying to find out a price.

They say the deal is more possible in the case West Ham fail to qualify for the Europa League group stages. This could bring the negotiations to the table, since so far the talks are in the very early stages.

But Obiang would only be a reality for Torino in case they really sell Nikola Maksimovic. They would use the money from the defender’s sale to invest in the midfielder.

Obiang signed for West Ham from Sampdoria last summer for €6m. The article doesn’t mention how much would Torino think the Hammers ask for him.