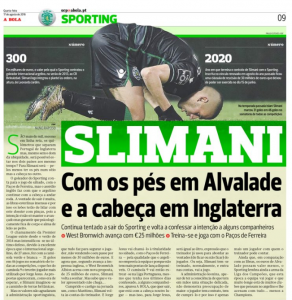 Portuguese newspaper Record says in their Sporting section on Wednesday that the only possibility of him leaving is if the club back off from their demands, since they’ve asked for at least €30m.

West Brom had already increased their offer from €20m to €25m, so maybe that’s why the newspaper rules out the possibility of the Baggies raising it again. But although Record claim the player is more likely to stay, A Bola says his head is in England.

Slimani has been wishing to play in the Premier League for a while, and according to the newspaper, he has been speaking about this desire with some teammates.

The Algerian striker is having the longest transfer saga of the year. More than sixteen Premier League clubs have already been linked, but no one wanted to pay the €30m demanded by Sporting.

Slimani did have a €30m buyout clause but that expired earlier this summer and will be applicable agin next year.