There’s set to be a ‘new episode’ between Tottenham Hotspur and Lyon, report L’Equipe.

Daniel Levy and Jean-Michel Aulas locked horns for Hugo Lloris in a tough negotiation which went to the wire.

Both men have reputations for being strong in negotiations, explain the French newspaper, and now Tottenham have begin talks to sign 21 year old midfielder Tanguy Ndombele.

Tottenham’s Levy is ‘determined to act quickly’ according to the French newspaper, and ready to make a big effort. Mauricio Pochettino has already done his thing and ‘even personally committed to the process of seduction’.

L’Equipe details ‘discussions about a possible offer up to €40m’, but Lyon very much don’t want to sell. Their public face is said to say Ndombele isn’t for sale, full stop, but in private the figure of €60m could ‘make Lyon think’. 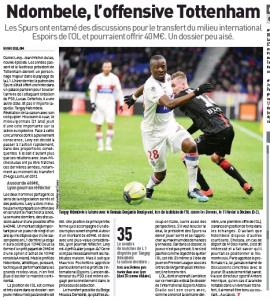 Unless Tottenham are prepared to go to such an amount, then the L’Equipe slant is that this one probably isn’t going to work.

Chelsea and PSG both have some level of interest but not at the stage of Tottenham’s.