Arriving from Stade de Reims back in 2018, Julian Jeanvier is now one of the first names on the team sheet at Brentford, who are currently right in the middle of a battle for promotion to the Premier League.

The club sit fourth in the Championship, and with 22 starts from a possible 28, it’s fair to say the Guinea international has played a huge part in their good run of form.

However, in an interview with France Football, the centre-back revealed that when Brentford came knocking, the idea of moving to England wasn’t part of his plans.

He said: “First of all, you have to know the scouts from here looked at me more than 20 times during my last season with Reims! They then got in touch with my agents. They told them they wanted to sign me. At first, I’ll tell you the truth, I wasn’t too keen on the Championship and all that.

“Especially since we were going up with to Ligue 1 with Reims! But when they came to my house to show me their project, I loved it! They detailed everything, and that helped a lot”.

The defender explained Dean Smith FaceTimed him twice as part of Brentford’s attempts to convince him to sign, before Jeanvier travelled to the club to sit down properly with the directors of footballs.

After visiting the infrastructures, the player explains he had one last chat with Smith, now at Aston Villa, before agreeing to move.

His mind has changed now, as he explained: “I signed here for four years and I don’t regret it at all for now. Since I got here, I’ve really enjoyed myself. I like the Championship’s intensity”. 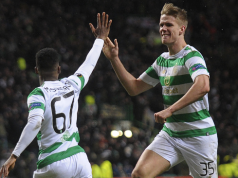 “Don’t focus on my future at all” – Celtic player refuses...

Wolves star on his old soft-spot for Everton – And getting...