Matheus Pereira is pretty close to becoming a permanent signing for West Bromwich Albion, and the Portuguese media is already counting on it.

A Bola today has a big piece about the midfielder’s move, which could be concluded in case he starts against Nottingham Forest this weekend.

Pereira’s loan contract from Sporting said there were two ways for him to move permanently: making 30 appearances in the season or getting the promotion to the Premier League.

Since the player has 29 appearances and West Brom are on top of the Championship table, it’s quite possible that he gets the transfer both ways. 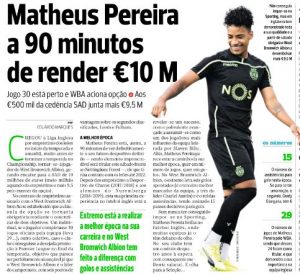 The Baggies had already paid €500k for the loan deal, and now will spend another €9.5m once the buying clause is triggered.

A Bola claims that there’s a four-year contract waiting for him at West Brom, which will include a pay rise as well.

The outlet also highlights that there are other big clubs who have been keeping an eye on him.

Liverpool ready to ‘cast the net’ on defender – Club chief...

“Took me out the game” – Brighton player on distraction techniques...