With the Serie A season now underway, there’s only a few weeks left for Italian sides to get the players they want in the transfer window.

Lazio, who kick off their season next Saturday against Cagliari, want a new defender, and they are looking at a couple of centre-back options.

We’ve already covered the latest on a possible Wesley Hoedt return, but another name that has popped up is that of Shkodran Mustafi, currently at Arsenal.

The German is currently out with a knee injury until the beginning of October, but there’s a feeling he could be sold if the right offer comes along.

This could be from Lazio, as Corriere della Sera report on Monday that the €15m asking price by the Gunners is ‘accessible’, and a deal ‘could be closed between €10-12m’. 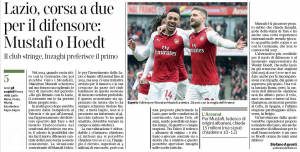 Mustafi is a long-term target for the Serie A club, who already liked him from his days at Sampdoria, and ‘his contractual situation is ideal for Lazio’s insertion’.

Running out in 2021, his deal at the Emirates makes him a prime target for a move this summer, and a ‘sale seems likely’, while his age of 28 ‘allows a long relationship of four to five seasons’.

This means his wages, while high at €4m/year, could be dealt with using a ‘multi-year proposal’ in order to convince him to move to Rome, where he would likely be a starter.

In fact, he is said to be Simone Inzaghi’s preference over Hoedt if possible, but the Dutchman remains ‘the most credible alternative’.