Home Premier League Chelsea Chelsea duo ‘objectives’ for manager before end of window – One his...
SHARE

Earlier on Monday, we covered an article from Gazzetta dello Sport claiming that Juventus could make a move for Emerson Palmieri before the end of the window if the ‘right formula’ was made available to them.

The Italy international has been left out of the first couple of games by Frank Lampard in the Premier League, preferring to use Marcos Alonso down the left hand side of his defence.

Well, the Spaniard could also be on the move, at least if Inter and Antonio Conte get their way, as Gazzetta also report both Alonso and  N’Golo Kanté are ‘objectives’ for the Serie A side, who are set to play Fiorentina next Saturday to kick off their (delayed) start to the campaign.

The pair are described as ‘more or less complicated’ targets for the Italians, and while Emerson Palmieri is also mentioned, it seems the Spain international is the preference (albeit ‘more expensive).

As for Kanté, he’s described as the ‘great dream’ for a midfield ‘more and more international’ at San Siro, which is backed up by Corriere dello Sport, who claim it would take €50m + bonuses to get the Frenchman. 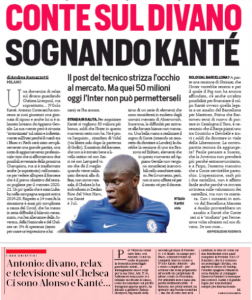 Those are funds Inter don’t have, and there would be a need to sell either Christian Eriksen or Marcel Brozovic before such an offer can be made.

With no takers for either right now, it seems Inter and Conte will have to wait.