On Friday Spanish newspaper AS had David De Gea splashed across their front page and re-launched claims he could be set to join Real Madrid. It was stated Real Madrid president Florentino Perez is determined to sign the player he missed out on last summer.

AS explained Real Madrid could sign De Gea for €50m as long as a deal was done before June 15th. They also stated that De Gea had told Real Madrid he wanted no saga and to be sure of his future quickly. To further emphasise the situation, AS said that De Gea has been having a house built in a nice area of Madrid, where he’d live with girlfriend Edurne.

The AS English language website was even more confident, stating: ‘Unless there’s a Mourinho plot, or sabotage to the famous Bernabéu fax machine, David de Gea will be a Real Madrid player within a matter of days.’ 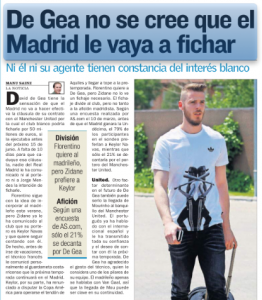 Therefore, it’s a little surprising to see them report on Sunday that it’s not looking like a transfer will happen. AS state David De Gea ‘gets the feeling’ that a move is off because he’s had no contact with Real Madrid. Perez is still keen on De Gea, but Zinedine Zidane prefers the option of Keylor Navas continuing in goal, and so do Real Madrid fans.

De Gea is said to have caused a split at Real Madrid, and there’s a lot of uncertainty. So, from a transfer being absolutely nailed on in their Friday reports (‘Unless there’s a Mourinho plot, or sabotage to the famous Bernabéu fax machine’) it’s changed to much less likely in two days.