With Porto striker Moussa Marega being linked to Premier League clubs for many years, it seems the rumours will continue until the player’s last gasp at the Portuguese side.

The 29-year-old is now set to leave the Dragons at the end of his contract with the club this summer, and with his future open, English sides are back being named in the local media today.

Newspaper A Bola features a story which is mostly about Fenerbahce, and includes mentions of Crystal Palace and West Ham as well.

They say the Eagles and the Hammers are an ‘example’ of clubs with big financial power who’ve been in touch for the player, with ‘rumours of approaches to his agents’. 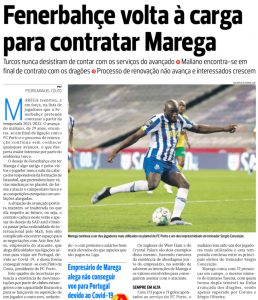 We’re just not sure if A Bola refers to these ‘rumours’ as recent claims from the press, because there have been none, at least in the past few months.

Perhaps this lack of certainty from the outlet is why they make Fenerbahce sound like the favourites to land Marega on a free move in the summer.

The striker has 11 goals and five assists for the Dragons this season, and always stood out for the club since joining them in 2017.

It wouldn’t be strange to see Crystal Palace or West Ham going after him on a free move, especially after being linked to the player at a time they’d have had to pay many millions for the signing. However, it’s still strange to see this rumour suddenly rising from the ashes, with a big newspaper not making clear where their information comes from.