Max Meyer has faced all kinds of criticism from the German media over the past few years, with quite a lot of it seemingly encouraged and massaged by Schalke.

When he was refusing to renew with the German club, there were narratives sent to the media covering Schalke. The idea was to make the club look reasonable and Meyer look like a big-headed young footballer only interested in money.

Then when he moved to Crystal Palace he was further mocked, and it’s happened again more than once during the season.

Throughout all of this the player has stayed relatively calm, which reflects well on him, but on Tuesday evening he let go. 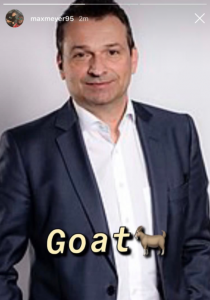 With Schalke losing 7-0 to Manchester City, he posted an image of Christian Heidel, Schalke sporting director, on Instagram… with the word GOAT.

Now, of course that means ‘Greatest of all time’, and Bild say the Crystal Palace man was engaging in some ‘ridicule’.

Last month Heidel announced he’d be leaving Schalke at the end of the season, after a disappointing period with the club.