Wednesday’s edition of AS claims that return of Zinedine Zidane to Real Madrid will complicate Gareth Bale’s future at the Spanish capital club.

Los Blancos new manager and the Wales international did not enjoy a good relationship and that’s been brought into focus since the Frenchman’s return.

It’s claimed Zidane wants the La Liga outfit to offload the 29-year-old in the summer and the Spanish newspaper takes a look at the options available for the forward and his former club Tottenham Hotspur gets a mention.

AS believe the north London club are aware the 13-time European champions will go for Christian Eriksen, who will have a year left on his contract after this campaign.

There is a possibility that Spurs could use Bale as a bargaining chip when negotiating with Real Madrid for Eriksen, but the Premier League side will not be able to pay even half of his €12m per year net wages.

For this reason, Tottenham president Daniel Levy has an ‘ingenious idea’ and that is to take the former Southampton man on a season-long loan deal and pay a small part of his wages, allowing Zidane’s side to pay a majority of the salary. 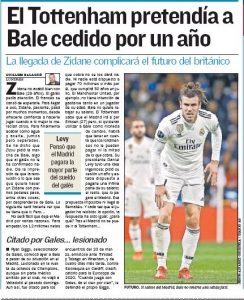 However, this proposal hasn’t yet reached the Santiago Bernabeu and Bale is said to be against a return to Tottenham.

Levy must have been aware it would be difficult for Bale and his employer to accept the ‘ingenious idea’.

That’s if it exists.