Newcastle United have a firm desire to strengthen the centre-back position in the winter market and after failing to sign Lille’s Sven Botman, efforts are focused on Diego Carlos.

On Tuesday, ABC Sevilla reported the defender’s agent insists the Magpies will reach a figure of €50m to sign the Sevilla star.

Wednesday’s edition of the same newspaper relays their own claims and provides a fresh update on this case. They state the 28-year-old’s short-term future remains unknown.

The La Liga side have rejected two proposals made by the Tyneside club and the latter could ‘go all out’ and ‘decide to break the market’.

Carlos is a key player for the Spanish club and they have informed the Brazilian’s agents they don’t want to sell him, unless ‘Newcastle go crazy and make a super offer’. The situation is similar to the one Jules Koundé experienced last summer, when Chelsea came with a €50m offer. 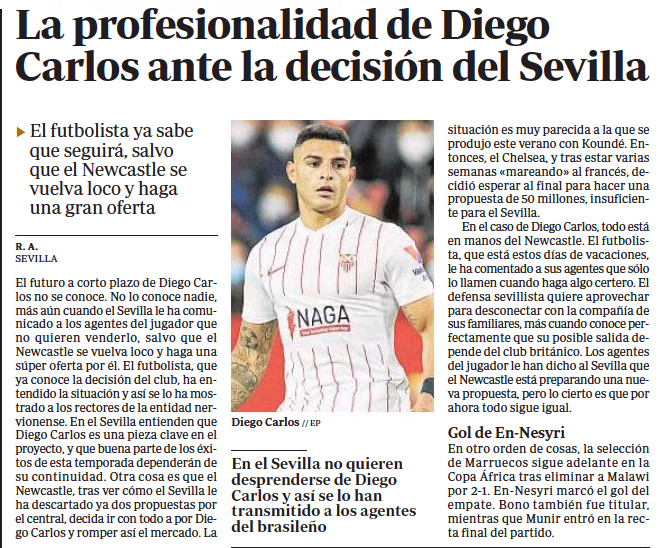 The South American is currently on vacation and has informed his representative only to call him if there is something concrete.

ABC Sevilla state Carlos’ short-term future is unknown because ‘everything is in the hands’ of Eddie Howe’s side. His possible departure depends on Newcastle.