Napoli will have to look internally before looking elsewhere to shape up their squad next summer as they need to sort out contracts of those players who have six months left on their current deals.

Last August, the Serie A side had to wait until the deadline day to take André-Frank Zambo Anguissa on loan from Fulham, for whom they have an option to make the stay permanent.

Corriere dello Sport state the Italian club would avoid wanting to find themselves in a situation to ‘face a theoretically emergency and practically complex situation’ for the next summer window.

The newspaper points out it will be necessary for Luciano Spalletti’s to ‘rebuild the team’ because ‘many will leave’ after this season, and Napoli and their sporting director, Cristiano Giuntoli, have ‘fresh ideas’, and are waiting for developments.

It’s claimed the Naples club are pursuing players who can operate in more than one position and this is where Fulham’s Tosin Adarabioyo fits in, as the 23-year-old operates as a centre-back, but can also be used on the right side of the defence.

Corriere are of the belief the versatile player ‘can represent a pillar of defence’, if he 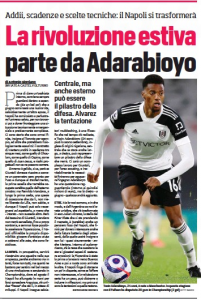 swaps the Championship side for Napoli.

Giuntoli and the club’s scouts will have ‘complex work, ‘and inevitably the needs will end up sharpening the wits’.

Adarabioyo has a ‘considerable’ price tag of about €15m and next June, his valuation could rise, if he were to continue to shine from now until the end of the season.

Napoli are in the picture for the Fulham defender, but whether or not they can convince both the English club and Adarabioyo for a transfer remains to be seen.