As we move closer to the summer transfer window, newspapers are starting to wonder where some players might end up.

Sergio Agüero is the latest to cause a stir on the transfer market following the announcement he would be leaving Manchester City at the end of the season, but there are some where uncertainty still reigns.

Mikkel Damsgaard is one of those, a long-term Tottenham target who has become a shining light in Sampdoria’s season under Claudio Ranieri.

Spurs have been said to be ‘crazy’ about the young Dane, whom they would reportedly want in the summer, but that doesn’t fit with the Serie A side’s plans.

Gazzetta dello Sport take a brief look at the forward and his future, explaining he is ‘destined to become one of the most important capital gains of Sampdoria’s near future’. 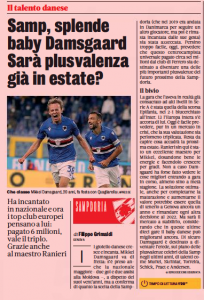 However, for that to happen, they have an ‘optimal solution’, which is for him to ‘complete his maturation and increase his value by keeping him in Genoa for another year and postpone any other decision to 2022’.

That’s all well and good, but Gazzetta are realistic, explaining the transfer market ‘will establish’ whether or not that comes to fruition.

We all know money talks in the world of football, especially after a year of financial struggle caused by the Covid-19 pandemic, and Tottenham will be in a far better economic position than Damsgaard’s side, meaning a nice offer from Daniel Levy to please José Mourinho could change everything.