With the English press reporting at the weekend that Newcastle United are interested in Benfica winger Rafa Silva, there’s of course a reaction from the Portuguese media today.

Most outlets are only covering the original claims, and it’s only newspaper A Bola who managed to get some information on the player’s situation.

Their report claims that Benfica are open to negotiating Silva’s transfer this summer, as they look to balance their accounts. He’s considered to be one of their best shots to make cash in the coming months.

A Bola managed to confirm that there are ‘approaches’ for the 28-year-old so far, even though any formal offers are still to be made. 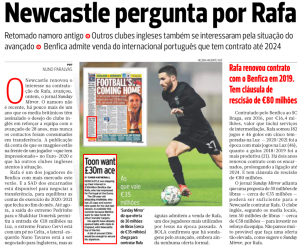 He’s currently protected by a release clause of €80m, and the story doesn’t bring an opinion on the claims which said £30m would be enough to sign the player.

Portuguese outlets are now getting used to seeing Rafa Silva linked to Newcastle.

A Bola point out this rumour has been around for over a year, while Record writes that this interest has become a ‘classic’ in every transfer window.