Home Premier League Arsenal Club ‘would not oppose’ deal with Arsenal for player – Gunners would...
SHARE

Inter Milan are willing to discuss a swap deal with Arsenal for midfielder Christian Eriksen should the Gunners be open to it as well.

Reports over the last month have stated that the Serie A side are keen to offload Eriksen, who has failed to establish himself since arriving from Tottenham in January.

Antonio Conte is particularly keen to add a defensive midfielder to his squad and Arsenal’s Granit Xhaka is believed to be on a list of potential targets they are looking at.

Inter would prefer a swap deal if that was the case, perhaps even a swap loan deal and Eriksen has been named as an ideal option given Mikel Arteta’s side are desperate for a creative spark.

Getting such a deal over the line would be complicated, to say the least, but it appears one major hurdle has already fallen by the wayside.

Corriere dello Sport report today that if Arsenal ‘will accept’ the Eriksen-Xhaka ‘exchange’, Inter ‘would not oppose it’ either. 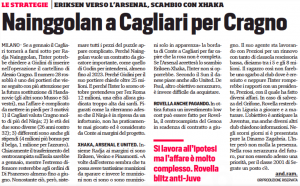 That suggests they are very much inclined to work out a deal if one is proposed, but it will have to be Arsenal who propose it first and that, of course, will depend on their feelings about Xhaka.

This isn’t the first time they’ve reported it, and while it might have seemed like a random claim at first, their insistence to stick with it suggests there might be something there.

Following his sending off at the weekend it’s easy to see them being more open to a deal, so perhaps Inter would be wise to strike while the iron is hot.