Just before the weekend, it was reported that Chelsea and Juventus were set to have a meeting for the possible transfer of Jorginho from London to Turin.

Well, it appears the Blues have scheduled a number of appointments with Italian clubs, as Gazzetta dello Sport report on Monday that one with Inter is also going to take place ‘soon’.

The reason for this meeting is Emerson Palmieri, whom Antonio Conte would like to work with going forward.

Inter, who have been impressed with how the former Chelsea manager has done so far at San Siro, are ‘hoping to gift’ the left-back to their manager, which is why they want to sit down with those in charge at Stamford Bridge. 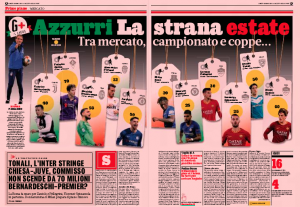 Gazzetta explain Beppe Marotta is hoping to strike a deal there and then with the Premier League side for their Italy international, which seems like wishful thinking.

Although, the recent rumours suggesting Chelsea are one of two clubs interested in Alex Telles would suggest they are ready to part ways with one of Palmieri or Marcos Alonso going forward.