Having managed him at both Napoli and Chelsea, Maurizio Sarri really appreciates what Jorginho brings on the football pitch.

It isn’t a secret, and neither is the fact the midfielder is currently a target for Juventus, who are now managed by the Italian, as a potential replacement for Miralem Pjanić.

We know this because the Italian media have been trying to drill it into our brains for the past couple of weeks, but Corriere dello Sport’s report on the matter on Friday suggest the first steps have been taken towards something actually happening.

Jorginho is seen as the ‘ideal’ substitute for the Bosnian, and ‘contacts with Chelsea are underway’.

Not only that, but it’s explained that ‘a new appointment will be in the agenda soon’ between the clubs to discuss the Italy international. 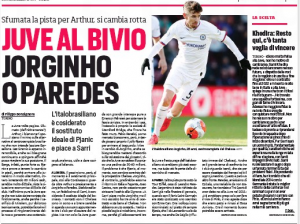 While they’re there, Juventus will also throw in the name of Emerson Palmieri as they look to bolster the left hand side of their defence, but it’s primarily about Jorginho.

The ideal scenario would be a swap between the two players, but Corriere believe the former Roma midfielder ‘doesn’t seem convinced’ by a move to Chelsea, much to the contrary of the Blues’ midfielder, who would ‘welcome’ a return to Italy.

It’s early days, and while Jorginho’s agent maintains he hasn’t had any contact with Juventus of late, Corriere say that isn’t entirely truthful

Either way, it’s still early days, but this is going to be long and tedious, isn’t it?