Liverpool have had a reported interest in Paris Saint-Germain star Kylian Mbappé for some time.

For the past few weeks, multiple reports coming out of Spain and France have detailed various developments on the Reds’ efforts to sign the forward.

On January 19th, Sport explained the Merseyside club are ‘willing to compete financially’ with Real Madrid for the 22-year-old.

It was stated Jürgen Klopp is in regular contact, both with the France international and his entourage, and the manager is leading the Premier League winners’ interest in the player.

Later than month, French pundit Geoffroy Garétier reported Liverpool want to make the World Cup winner the ‘face of the franchise’ and are using the help of Fabinho, Mbappé’s former AS Monaco teammate.

The Frenchman’s immediate focus will be on the midweek Champions League clash against Barcelona.

Lionel Messi will lead the Catalan club and Monday’s edition of L’Equipe takes a look at the possibility of his arrival in Paris later in the summer. The Argentine’s contract expires after this season and he can move elsewhere on a free transfer, if he decides against signing a new deal at the Camp Nou.

PSG sporting director Leonardo has already admitted ‘great players’ will always be on their list, when addressing rumours linking the Ligue1 winners to Messi. Neymar has publicly expressed his desire to play with his former teammate next season.

When discussing various reasons why PSG should look to take Messi, Mbappé’s future is mentioned.

One of the reasons Leonardo has positioned himself for Messi is because PSG ‘anticipate the departure’ of Mbappé in the summer. The latter has a contract until 2022, and he ‘hesitates’ and is ‘slow’ to sign an extension.

Should he decide against signing a new deal before the summer window, PSG would have to part ways with the attacker in order to recover a significant part of the money [between €100m and €150m] they invested [€145m plus €30m in bonuses] for his signing.

Mbappé’s exit would be a big loss for PSG, both in terms of sport and marketing, and their Qatari owners may look to cover the potential loss of a huge player by signing Messi on a free transfer. 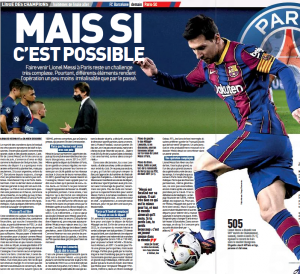 Liverpool have been monitoring the PSG star’s contract situation and if he decides against signing an extension before the season ends, the English champions would be in the picture to take him away from the Parc des Princes.

Klopp has reportedly been leading his side’s interest in Mbappé by maintaining regular contact and this would be key in helping the Anfield club in the potential summer transfer chase.