Manchester City and Paris Saint-Germain will ‘obviously be favourites’ to sign Lionel Messi, if he decides to end his adventure at Barcelona.

That’s according to L’Equipe, who take a look at the options available for the 33-year-old at the end of this season, which is when his contract at the Camp Nou expires.

Last December, the Argentine stressed talks regarding his future will have to wait until this campaign is completed.

According to the newspaper, the forward has asked his representatives ‘not to let him know about any offers’. He wants to stay focused on the Catalan club’s sporting objectives for this term.

Before deciding on whether or not to continue at the Camp Nou, he will have to take into account various elements.

The first being the sporting project the La Liga giants will present to him because he wants to continue at the highest level, at a club that can compete to win the Champions League.

Barcelona can only present Messi with a good sporting project once they elect their new president.

The election will take place on March 7th, and two of the three candidates, Víctor Font and Joan Laporta, have already stated they will do everything they can to retain the star.

The third factor would be his ‘attachment’ to his daily life in Catalonia. L’Equipe state: ‘He arrived in 2000, at the age of 13, he leads a peaceful life with his wife and three sons in the wealthy seaside town of Castelldefels, which he finds it difficult to renounce.’

Should he decide to leave, he will have the option of joining either PSG or Manchester City, and these two sides are ‘obviously favourites’ as of now. 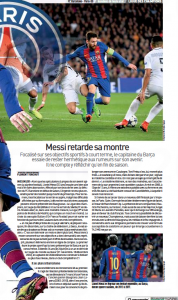 Messi played under Pep Guardiola at Barcelona and a move to the Etihad will see him reunite with his former manager.

The presence of Mauricio Pochettino as the PSG manager, coupled with his friends, Neymar, Ángel Di María and Leandro Paredes, with whom he regularly talks on WhatsApp, could favour the French club over City.

For now, City and PSG are in the front row to sign Messi, if he decides to leave Barca. Should he end up in the Premier League, the South American can further bolster Guardiola’s squad.